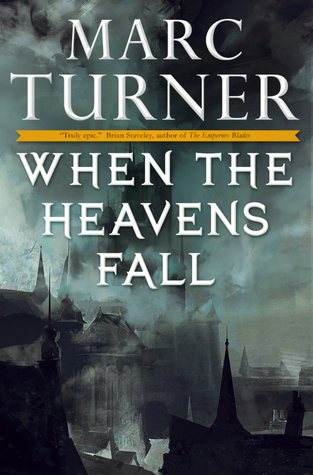 When the Heavens Fall by Marc Turner is the author’s debut novel. This is a big swords and sorcery epic that seems to channel a touch of Steven Erikson. The story is catapulted into action by the theft of a magical book that is filled to the brim with magic; the Book of Lost Souls. As the mage who stole the book begins to explore its power over the dead it begins to drawn the attention of gods and men into an epic convergence of power. The story follows several characters from different corners of the world as each is drawn ever towards the book’s power; each for a different reason. Luker, a magic wield swordsman called a Guardian, seeks to find his master who was also on the trail of the book; Romany, a priestess of the Spider is an agent of her Goddess’ machinations; Ebon, a Prince whose home lies close to the site of the convergence seeks to end the book’s effects on his people (mainly in the form of an army of undead); and Parolla a mysterious necromancer whose motivation I don’t want to spoil.
END_OF_DOCUMENT_TOKEN_TO_BE_REPLACED

Before I started Graduate school way back in the late ‘aughts I read a little book called Writ in Blood by James A. Moore. Set in the small town of Serenity Falls, Writ in Blood was a fantastic little book that marked the beginning of a trilogy detailing the horrific past and present of a small town long past its heyday. Sadly by the time I was done with graduate school the Serenity Falls series was out of print. Moore recently entered the fantasy scene with Seven Forges published by the fine folks over at Angry Robot. The novel opens with the mercenary caption Merros Dulver on an expedition into the dangerous Blasted Lands there to investigate the enigmatic Seven Forges; a range of strange mountains. Sent by the Emperor’s Sorcerous advisor, Desh Krohan, Merros is startled to discover that the Blasted Lands and the Seven Forges themselves are not as uninhabited as previously thought.

END_OF_DOCUMENT_TOKEN_TO_BE_REPLACED

Ghost Fleet: A Novel of the Next World War is a new military thriller available in June. Singer has written several non-fiction titles about war and military industrial complex. This appears to August Cole’s first book and both authors’ first novel. Singer and Cole blend familiar tactics with modern (and future) technologies to tell the story of a Chinese attack on Pearl Harbor that heralds the beginning of another world war. Ghost Fleet is a fascinating premise that, while speculative, is grounded in technologies and tactics that either currently exist or could exist in the near future. The authors’ premise is backed by a rather extensive bibliography at the end of the novel. As such, Ghost Fleet makes an interesting thought exercise marked with some thrilling action set pieces. Ghost Fleet is a breezy, quick read, that will be well-suited to anyone looking for an exciting piece of fiction to enjoy by the pool or on the beach.

Ghost Fleet, while on sure-footing when talking about tactics  and technology, and while dealing with action, is far less sure when it comes to characters. While some exceptions, particularly the U.S. Marines turned insurgents in Hawaii, many of the characters feel like deliberate tropes who fall into familiar roles. The novel, clocking in at decent 417 pages, is fast paced but offers little room for developing the myriad of characters seen across the novel. In a bizarre move there is significant section of the novel  given over to the hunt for a serial killer in occupied Hawaii. This section of the novel marks for a sharp departure from the military and political focus of the novel. If the intent was to illustrate the effect of occupation on the Hawaiian population then it falls flat on its face. That isn’t to say the serial killer story isn’t interesting, or even well-written, it most certainly is both of those things. However, its tone is such a departure from the rest of the novel that I frequently found it distracting. The various perspectives seen in Ghost Fleet could likely have each filled out their own novel and trimming some of the dross could have lead to a deeper emotional investment in the characters. As a result, I was not invested in the fate of the characters and simply pressing forward to see what happened next.

Ghost Fleet, while exciting feels like a novel that could have been far more that what it ended up being. This fact is depressing because it still manages to be an exciting read that draws the reader in with a vivid picture of a war the could have been. Ghost Fleet will be available in the U.S. on June 30th.

You should know first that I am fan of Cinema Sins. Jeremy is half the writing team behind Cinema Sins and the narrator so when I saw on their Youtube channel that Jeremy had written a book I figured that I should check it out. It didn’t hurt that John Dies at the End author David Wong has a nice little quote up over on the book’s website. I jumped when I saw that Netgalley had it up. The Ables is about a secret society of superpowered peoples living around us. We don’t see them but they are there protecting us from both regular criminals and from super-powered individuals who do not have out best interests at heart. So when Phillip Sallinger learns that he has inherited superpowers he absolutely ecstatic; even if his telekinesis is difficult to use due to his blindness.

END_OF_DOCUMENT_TOKEN_TO_BE_REPLACED

I really enjoyed Daryl Gregory’s We Are All Completely Fine wherein the titular hero of Harrison Squared, Harrison Harrison, is introduced. It was a quiet, contemplative novella about monsters and scars that was equal parts heart-warming and chilling. A prequel of sorts Harrison Squared is Harrison’s origin story featuring his first brush with the supernatural. It also borrows heavily from H. P. Lovecraft’s The Shadow Over Innsmouth so reader’s familiar with Lovecraft’s work may be able to telegraph where the novel is going. Despite this fact (or maybe because of it) I found Harrison Squared to be an entertaining supernatural yarn.

END_OF_DOCUMENT_TOKEN_TO_BE_REPLACED 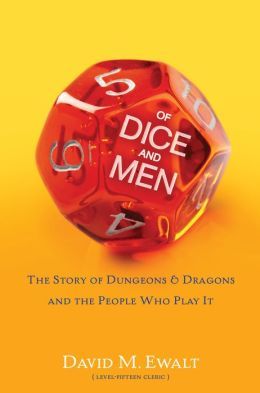 I’m not one to typically read short story collections or anthologies but the theme behind the latest John Joseph Adams’ edited Operation Arcana was sufficiently intriguing to pique my interest. The focus of Operation Arcana is on military fantasy and includes a wonderful list of contributors. The stories in Operation Arcana run the gamut from high action, to more subtle medications of war and combat. By and large Operation Arcana is full of tight, entertaining fiction. I’m not going to go through every story in the anthology but there were really a handful of stories that absolutely blew me away.

END_OF_DOCUMENT_TOKEN_TO_BE_REPLACED

The Emperor’s Blades was one of my favorite debut novels in recent years. A fast-paced narrative and fantastic characterization (for most of the characters) made the pages fly by. The novel had a few issues particularly that the world-building was a little bit light and the only female character felt like a secondary consideration. Thankfully those issues are resolved with the release of the second book in the Chronicle of the Unhewn Throne, The Providence of Fire. Picking up just after the conclusion of the first novel it follows Kaden as he is escorted by Valyn and his Kettral wing on a mission to hopefully get more information on the Csestriim threat that has suddenly rematerialized. Meanwhile, Adare comes to terms with the snake who engineered her father’s downfall and seeks new allies in a dangerous bid to secure her family’s imperial position.

END_OF_DOCUMENT_TOKEN_TO_BE_REPLACED

I’ve had limited exposure to the writings of Asimov but my encounters with many older science fiction works have shown me that in many cases their strengths lay in ideas over characters. As a reader whose attention is drawn to vivid characters this often poses a problem. Niven and Porenelle’s The Mote in God’s Eye had similar problems and I’m not sure I can name a specific character from Rendezvous with Rama. Each of those novels were in one way or another a struggle for me typically since engaging with the novel leaned almost exclusively on the intellectual rather than the emotional. Foundation opens up with a fascinating concept: a psychohistorian, Hari Seldon, has used mathematics to determine that the current Galactic Empire will fall into ruin. Needless to say this sends the current leadership of the Galactic Empire into a bit of an uproar and sees Seldon and his compatriots exiled to the far end of the universe where they can continue their work without upset the current order. What follows is a march through time as Seldon’s work echoes through the ages as he and his descendants seek to limit the impact of the “dark age” that follows the empire’s fall.