A day early but I figured I’d get a jump on this now.

The Spirit Thief by Rachel Aaron

The Dragon’s Path by Daniel Abraham

The Drawing of the Three by Stephen King

The Wolf Age by James Enge

The Door to Lost Pages by Claude Lalumiere

In June on I plan on powering through A Clash of Kings, A Storm of Swords, and A Feast for Crows in order to be ready for A Dance with Dragons when it releases in July. I have a couple of reviews in the works for The Last Page by Anthony Huso (challenging and interesting), The Dewey Decimal System by Nathan Larson (semi post-apocalyptic thriller noir), Leviathan Wakes by S. A. Corey (crunchy space opera awesomesauce), 7th Sigma by Steven Gould (slick YA read), and Dreadnaught by Jack Campbell (new Lost Fleet series but I never finished reviewing the original Lost Fleet series). I’m almost finished with the audio version of Robert J Sawyer’s WWW: Wake and I’m chomping at the bit to move onto the next book in the Fate of the Jedi series (I hate the irregular publishing schedule with a fiery passion).  I’ll also be trying to make it through my 30 Day Video Game Challenge which is slightly longer than 30 days since I missed a couple of days and I tend to take weekends off.

Since having discovered Charlie Huston some time ago he has quickly rocketed up into my circle of favorite authors. Blackstone Audio’s production of Huston’s Joe Pitt series read with style and panache by Scott Brick are some of the best audiobooks I’ve ever listened to and The Mystic Arts of Erasing All Signs of Death was a unique, gritty, sometimes hilarious, and constantly entertaining crime novel. While I certainly did not have as much fun with Sleepless as I did with Huston’s other work it is definitely his most thought provoking work.

An insomnia inducing disease is sweeping across the nation; SLP a disease that erodes the mind driving victims insane and eventually to death. Society has not coped well with the disease and the Los Angeles that is the main setting for the novel is one quickly crumbling into chaos and disarray. Officer Parker Haas is working undercover in the drug trade, rampant now that the titular sleepless seek an escape from their suffering, trying to track down illegal trafficking of the consumer drug DR33M3R; the only known effect method for sleepless to actually sleep. Thrown into the mix is the aging mercenary/assassin Jasper who is hired to retrieve an item in Haas’ possession by any means necessary.

END_OF_DOCUMENT_TOKEN_TO_BE_REPLACED

The first half of that is actually a really long list.  The name that pops into my mind most consistently is Gordon Freeman.  Silent, inscrutable, and iconic he is perhaps the most bad ass physicist to walk this world or any other.

Of course like many video game protagonist he is proxy for the player.  I feel very few video games have managed to create and introduce protagonists that are worthwhile characters in their own right.  This brings me to the second part I mentioned: a protagonist I find interesting.  The video game protagonist that fascinated me the most was Grand Theft Auto IV’s Niko Bellic.  Violent, cynical, with a checkered past I was fascinated by his complicated nature.  Bellic remains, to this day, one of the few (if not the only) character that felt in some way real to me.  Which is sad since the gameplay of GTA IV was not enough to keep me playing; Niko’s story remains unfinished.   Part of Niko’s realistic portrayal is the stunning voice work by Michael Hollick but the solid writing lends him an unexpected level of emotional depth.

Screenshot from the game I am playing right now, Dragon Age 2, three sexy ladies plus on irascible dwarf. 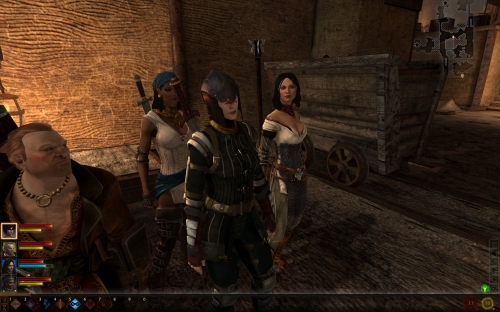 Day 15 is supposed to be a screenshot the game I am currently playing.  Since I don’t have a screenshot at the moment I’m swapping days 15 and 16.

Game with the Best Cutscenes

I’m going to give this one to Interstate ’76.  By and large I don’t like cutscenes but something about the stylized polygons of I76 and the well-acted characters hit all the right notes.

I’ll be honest, I barely have time to play a game once let alone five times.  Even games I love I’m not sure I could play five times.  Though I haven’t played them to completion I have started characters and campaigns in the Baldur’s Gate series more than five times.  That’s about as close as I’ve gotten.  If you extend this to multiplayer games, particularly those that don’t really have a single player component, then top honors (by a longshot) goes to the Battlefield series by EA/Dice.  Between Battlefield 1942 (and its glorious mod Desert Combat), Battlefield 2, Battlefield 1943, and Battlefield Bad Company 2 I’ve logged way too much time.

I had some Mass Effect 2 wallpaper a while ago.

Claude Lalumiere’s The Door to Lost Pages is a short novella of interwoven stories patched together to form a fascinating and enthralling pastiche that orbits in and around a bookshop known as Lost Pages. It offers brief snippets of the worlds and mythologies housed in the mysterious bookshop and gives readers a tiny taste of the lives and souls of the people who have encountered its book lined, dog filled interior. The novella doesn’t really offer a standard plot structure, though there is an overarching story to a certain extant, instead examining how the lives of everyday people are affected in startling ways by the smallest things.

END_OF_DOCUMENT_TOKEN_TO_BE_REPLACED

Missed another day!  This has been a busy weeks as I finally have some kind of feedback on a work project.  Anyway, here goes.

This one falls by default to the PC.  Despite having more friends playing on other systems the PC has been the rock solid foundation of my gaming world.  From early modem-to-modem DukeMatch to dabbling with the original EverQuest to glassy eyed clicking on the hordes in Diablo I have always been a PC gamer at heart.  Sure I’ve strayed in the past and even now I’ll sometimes pick up a multiplayer shooter on the 360 since I’m more likely to find friends there but by and large I’ll take my trusty mouse and WASD over any peripheral ever made.

Day 12: A Game Everyone Should Play

You’ll likely see this title again further on in the list but it’s about time I looked back on Interstate ’76.  Say what you want about arcade car action games but no game world, especially an original game world, has ever enthralled me quite so much as the muscle-car strewn world of fuel-seeking auto-vigilantes.  After the game came out and after its expandsion the franchise saw ever increasing simplification spawning the Vigilante 8 series which abandoned the simulation, story, and customization parts of the game for a more Twisted Metal like approach.  But the original….oh the original.  From its wondrous funktastic soundtrack, fast-paced action, unique characters, and undeniable attitude Interstate ’76 is a game that every fan of action games should play.  I still long for an in depth return of this franchise.  Thankfully for an inexpensive $5.99 you can still experience this game! (Assuming you can get the game to work properly this is not Good Old Games best work.)

Another really hard question.  With the types and mechanics of video games so varied across the board choosing a “best” when all games aren’t even doing the same thing is kind of difficult.  Several friends picked Batman: Arkham Asylum as their choice.  Not a bad selection with its solid fight mechanics, fun detection mode, and tons of things to find, explore and do.  It is an interesting amalgamation of mechanics that when taken in aggregate create a rather (sorry to any GWJers) create a rather compelling package.  But, if I’m being honest, the gameplay for all of its bells and whistles boils down to an elaborate key hunt.  Sure there are lots of little treats to distract you on the way but the game, gently but not without some force, leads you by the nose.  Of course this is true in just about every game and straying to far from a directed experience doesn’t necessarily make for better gameplay.  Arkham Asylum is the best interpretation of Batman gamers have ever seen and a stellar example of what solid gameplay is all about.  But it isn’t my choice.

When I think of games whose gameplay have captured my imagination and challenged my skills in a meaningful way two games come to mind: Crysis and Red Faction: Guerilla.  Bizarre choices I know but the open world combined with clear objects were the perfect brew of freedom and directed experience.  For Crysis this mostly involves the first half of the game without aliens.  The variety of modes in your suit combined with the freedom to pursue your object however you see fit was just about a sublime an experience an FPS junky can have.  Red Faction: Guerilla might not have the most stunning narrative in the world but like Crysis the open environment and freedom to pursue your object however you see fit.  What is telling about both games is that they sort of fall out when those choices are taken from you.  The beauty of the gameplay in either is in the choice and freedom and when the game tries to direct how you play things get a little ugly.

Red Faction: Guerilla (this vid is long but provides a nice example of some freeform destruction)

So, some of you might remember that I was rather a fan of the most recent Red Faction game, Red Faction: Guerilla.  It had its flaws but by and large it was a game that quite honestly never ceased to entertain me.  When it was announced that its sequel Red Fact: Armageddon would take place (at least partially) underground I was a tad skeptical.  How could a game designed around the destruction of property work in an underground environment?  My answer: it couldn’t.  So while I’ve by and large ignored the game since when I noted the demo on XBLA I decided to give it a shot.

I was pleasantly surprised.

Sure there are some things the demo does wrong (a cinematic chase scene that was fun to watch but would have been more fun to play) but by and large this is the same of whiz-bang explodely gameplay I loved from the original….with some added material.  Most notably is the addition of your ability to repair objects.  Accidentally destroy something? No problem, just hold down the left bumper and you’re good to go.  And the weapons.  Oh the weapons.  Liked remote mines in Guerrilla?  You’ll love   the mine gun.  Like singularity bombs?  You’ll really really like the Singularity Rifle.  Of course the best new weapon is the Magnet Gun.  Essentially you shoot two oppositely charged spikes that rapidly accelerate two objects towards one another.  That is precisely the amount of fun you think it might be.  On normal the game was pretty easy but still rather fun to play as things exploded all over the place.

I don’t know if it can live up to its predecessor but I’ll be damned if it won’t be fun.  Grab the demo over on XBLA  (or, presumably the newly operational PSN) and give it a shot.