I already have my “must-read” picks for this month’s new books in Sly Mongoose, The Steel Remains (which I probably won’t get until September), and Return of the Crimson Guard but there is plenty of other good stuff coming out this month (and, as always, plenty of good stuff I missed in previous months/years/lifetimes).

Robert, aka The Fantasy Book Critic, does fantastic coverage of upcoming books with a lengthy post w/ synopsis and links of a huge number of books. I highly recommend you check out his list for a range of titles that are being released (a few UK only) in August.

I also found this book at Barnes and Noble yesterday: 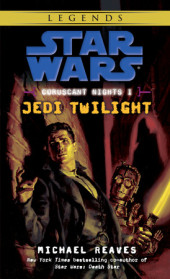 I admit I bought it on cover alone, but any book description that mentions Jedi and Private Investigator in the same sentence is a bit hard to resist.  I doubt I’ll see the same level of awesome as the genre blending The Automatic Detective but it’s worth a shot.  I also haven’t read a Star Wars novel since R.A. Salvatore killed off Chewbacca, so I look forward to delving back into the Star Wars universe again.

I’m also waiting for my library’s copy of From Asgard to Valhalla: The Remarkable History of the Norse Myths to be cataloged.  I’m terrible at reading non-fiction so I make no promises, but it is up for the 2008 Mythopoeic Scholarship Award for Myth and Fantasy Studies and I do love Norse mythology.

If you haven’t noticed, those of you that are actually regular visitors, I posted by first audiobook review over the weekend (not counting earlier thoughts on the Temeraire audiobooks).  I’d like to keep posting more audiobook stuff since I do listen to audiobooks quite frequently.